If you needed to hear it from a white person, OK, but that’s part of the problem

I think a lot about being an activist and an ally in communities I don’t really identify with except as an activist and an ally. The lion’s share of that thinking has been about contingent labor activism, but especially over the last week or two (yes, I’m late in getting to it, and one purpose of this post is to issue a mea culpa) I’ve found myself extraordinarily frustrated as I try to work against white power and privilege. Short version, as a white person committed to fighting against oppression and violence, the way white people (no, not all, but FFS close enough) are reacting when black people take to the streets is almost always frustrating, sometimes infuriating, sometimes stunning.

The simplest way to get at what I want to say about all this (for now) is to tell a story of the last several days by juxtaposing four texts: one vile; one almost entirely useless response; one that’s important but can’t stand alone as a safety valve for its endorsers; and the other exactly right–right, that is, in terms of how I want white allies/activists/sympathizers to be thinking about our roles/places in what I hope is a renewed movement to end white power/privilege. 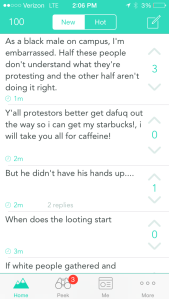 This is a screenshot of a social network called Yik Yak. I’ve never been on it, but after a protest event last Friday on campus, this (among several others) thread appeared. There were others that were worse. Nasty, profane, hateful (if not legally defined as “hate speech,” still expressing something really sick) stuff. I don’t want to give any of the rest of it any more attention than it’s already gotten.

2. A faculty member sent several of these examples to our university upper administration, and our president responded with this email to all users:

West Chester University has a longstanding commitment to civility and our Values Statement which promotes the respect, dignity, and inclusion of all campus community members.  Unfortunately, in response to recent student demonstrations some individuals have used social media to promote hate.  We reject such conduct.  Each of us should engage in conversations that advance knowledge and bring attention to the challenges we face.   After all, it is a fundamental mission of the academy to promote the exchange of ideas through civil dialogue.  Threatening and intolerant language has no place in this exchange.  Thus, I encourage everyone to express their opinions respectfully.

The response isn’t wrong, in the sense of inaccurate. It’s just empty. “Don’t hate hatefully. Hate nicely.” Well, thanks for that. To be fair, the grapevine has it that our administration is considering further action, and I’m hoping that something substantive happens next. If it does, I’ll gladly update.

3. In response to the president’s message, a group of faculty activists have signed onto a letter that thanks him for his commitment to diversity and equity, but respectfully requests that he do more than simply issue an exhortation to be respectful. I wrote in an email to some of those faculty that we need to remind him, “Hate is not an opinion.” The letter, which I’m not sharing here because it isn’t mine to share, is important. Our upper leadership must know that we need them to lead during this very difficult time. We need to voice our dissatisfaction. But…

4. Based on a conversation I had with a colleague on Monday afternoon and a fantastic blog post another colleague/comrade  pushed out Tuesday morning on Facebook, I’ve gotten a lot clearer on why the letter to the president is of limited value, and could undercut more important work if we don’t make sure to push onwards from it.

Dear white protestors, this is NOT about you.

The blogger, who writes under the name bendstowardjustice, makes the point strongly and repeatedly that white co-optation of black mobilization isn’t helping. As s/he puts it:

“All lives matter?” NO THEY DON’T AND THAT’S THE FUCKING POINT! Black people’s lives don’t matter, that’s why I’m out in the streets, to get people to realize that my life has worth. I have to protest to get people to even think about the possibility that if the police or some vigilante gun me down, it’s not because the genetic defects believed inherent in my blackness finally manifested and I had to be put down before I became more of a threat to white america. White america doesn’t need a reminder that “all lives matter,” it needs to be made to recognize and respect that Black lives matter.

In our local context, then, as much as I want to call out the racism and hatred of the people who anonymously posted their poison on Yik Yak, as much as I want to strong-arm cowards into suddenly having the courage to claim their hate; as much as I want our university president to stand up for the whole community, not just quickly remind people to hate nicer; as much as I want lots of things to happen, some of which are actually important; none of those should override the single most important thing that needs to happen, which is contesting-disrupting-fighting back against white power/privilege in all its forms, and remembering that our needs as a privileged class do not come first.

This entry was posted on Tuesday, December 9th, 2014 at 3:45 pm and is filed under Uncategorized. You can follow any responses to this entry through the RSS 2.0 feed. You can leave a response, or trackback from your own site.